This is My commercial product smooth which was made of various parts.

This was once a derivative of many ideas and schemas, but slowly it became somewhat original. 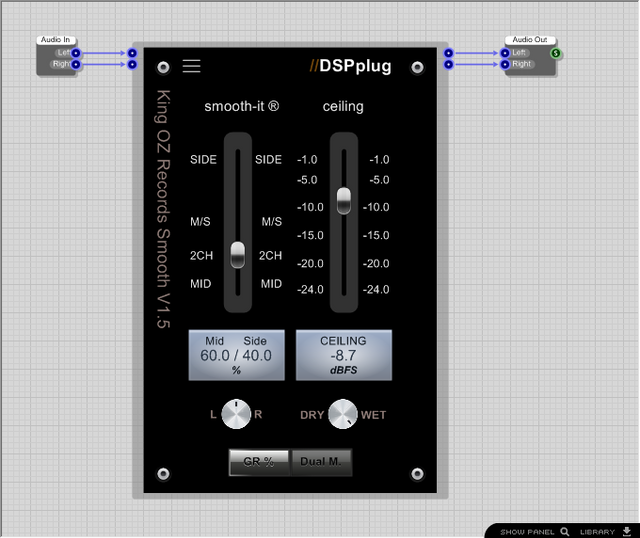 I had mentioned reverb being too thick btw, an idea like this is just what reverb needs, enjoy

.
"Thickness" is often a word in audio meaning basically harmonic distortion. Often interleaved sound has an effect throughout its spectrum and left will interfere with right. Though in the case of interleaved stereo, this is a desired outcome, that's not to say that the process can not be improved upon in the way of processing.

Limiters are often the means to which people turn to, to avoid things like plosives and drastic spikes and gain and lower levels which overpower a track both audibly and mechanically. I may also add a setting so that stereo width can be affected so as to clean up the sound even more (by selecting split / non-interleaved). However, limiters with an envelope can have a feedback unless they have special mechanisms so as to "reset". I bypassed that by using a saturating limiter instead, much like what's employed in the fruity limiter.

Beyond that, is the inclusion of mid and side; mid/side can drastically improve the thin-ness / thick-ness also in such a way that sounds really good. Notably, by using carefully made m/s (which is in-distinguishable from stereo) you'll also avoid about 15% of distortion overall. Mid side is never bad choice if you use it wisely.


leattol wrote:The person programming the FL reverb 2 must have had their mix wrong because their mid side is strict and has no mid. I guess I'd say to engineers that interleaving in the 1930's (when Alan Blumlein designed m/s) was drastic, and what the inventor heard included some mid also, so re-considering your stringent thinking towards this and add a little mid to the "side" setting of the reverb. Side was never designed to be used in tandem with stereo anyways, much less with such a lacking of amplitude.

EDIT: I changed the style of this product, because I had noticed that there was a problem with the utilized limiter code I'd sourced. If you push it too hard the release begins to overload, while I have solved that in the case of one instance, I'd realized a forced reset might be too difficult when looping with SSE assembly language. I've now added a dynamically driven saturation algorithm which initiated based upon amplitude. I think those that have an affinity for DSP in its purest form will really love this.
Last edited by leattol on Sat Feb 06, 2021 3:37 am, edited 15 times in total.
Top

I've made some updates to this product, I remov...
Top