I hope everyone who finds this is having a good day. 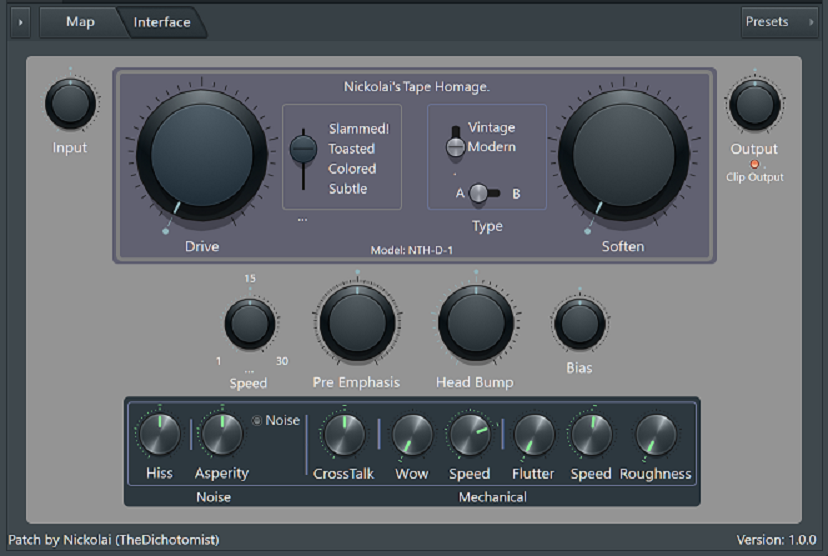 .
This is my homage to tape, and what it does to music in my experience. This patch is designed to be subtle (until it isn't anymore) so you can happily load it over full mixes for glue, density, saturation, lo-fi, and yes, even hi-fi tone coloration. (if you doubt that last claim, I applaud your seasoned skepticism. Now go try the patch, pumpkin.

It's fully featured, with latency free Wow and Flutter; Warm hiss; dynamic Asperity noise; Crosstalk; A treble softening (slew saturation) control that has an uncanny ability to only kick in when the mix really needs it's highs blown off (uncanny, considering the simple method by which I am achieving the effect); A complex set of head bump resonances; Level/saturation dependant high frequency dampening, A complex Tape Speed control, which revoices everything from the dampening, and high frequency loss "Pre Emphasis," to the head bump resonances, and parts of the saturation -- this macro does loads to the character of the patch; Two tape voices: Modern, and Vintage; Two Saturation/Bias modes "A, and B;" and finally, the lovely tape compression/saturation patch itself.
. 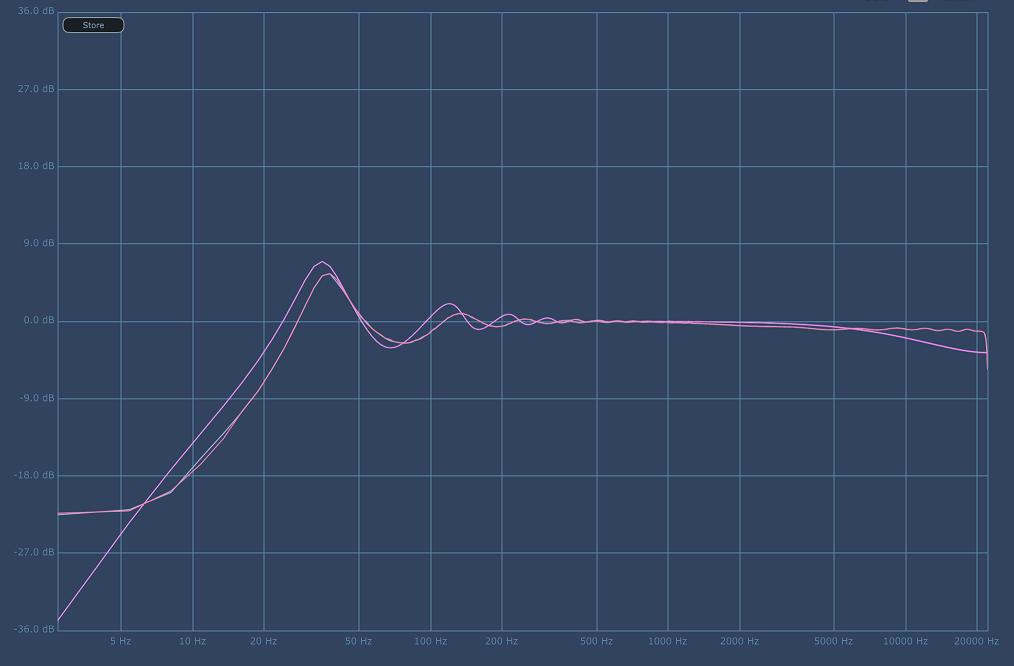 .
I built the basic model for each component of the patch in Plugin doctor, refined it over the last month, and re-built it easily 12 times by now. (Plugin Doctor crashes, and I can't save my work with the juice pack demo) This was then copied over to FL studio, parameterized, and tuned on full, commercially released mixes to give the subtle (and not so subtle) behavior I wanted. It can be weighty or thin, bright or dark (but tending towards dark), it can even do punchy with very low bias settings and a reasonable amount of drive. (2 O'clock when the gain stage switch is set to "Toasted." ) . . . All these glamorous sounding things don't mean it's going to be appropriate for your track, of course. While I think there's a setting in there somewhere for every track, it can sometimes be fiddly finding that setting, and the kind of head bump and saturation it does may not be appropriate for your music. Experiment and see if you like it

The patch clips differently depending on how you drive it. The drive knob gives the purest representation of my vision, while driving the plugin with input gain from the built in Input trim pot or external preamps will yield a grungy and very dark sound. The output has an optional (on by default) clipper, to save your monitors from overshoots from the head bump (which can be a large as an 8-9 db boost in the low end; as shown on the graph above. ) If the main drive is too clean for you, even on the "slammed," setting, push the in and output gain. It'll smudge right up.

Here's a quick snippet of Fuego96's remix of LoliVox' Optimum Momentum.
All I did to the project was disabled the master limiter in Maximus (not the multi-band part -- that's critical for the track's sound) and added my patch, tweaked for what I consider an enhancer type of sound. These files are RMS level matched, so there should just be the differences in color and envelope imparted by the tape patch. I think this thing does what you might expect from tape. Energy, excitement, low end treatment, top end treatment. (not really shown here)

The tape processed one has 3 db of headroom, so it can go considerably louder, and sounds a lot more "Radio," when you do.

[Edit:] This project contains a slightly older version of the tape patch. They sound nearly identical, but some parameter ranges are slightly different; mostly to do with wow and flutter. Also the control surface on this one has a funny gradient which I ditched in the final patch.

[Edit: ] One thing I forgot to mention. . . If you're going for "clean," or if you want to be sure you're hearing it at it's best, aim for a signal that doesn't peak over too far over 0db, and isn't peaking too far below -9 dbFS at the input. It likes loud-ish signals, but not too loud. It wants mixed, but not mastered material, basically. so do take care to use the input trim to get it in it's happy place, and compensate with the output trim if need be. I highly recommend placing a Fruity limiter or Peak meter after the tape, so you can visualize where the signal is, and see if the output is being hard clipped. (if it's constantly kissing zero, you're probably clipping. )

Also, the patch wants to run at 44.1k, it won't brighten correctly on high speeds with higher sample rates, and there's a small chance you'll get a highly bandpassed sound as well. (But I'll take care of that later today if it is a problem.)
Last edited by TheDichotomist on Wed Jun 24, 2020 12:43 pm, edited 3 times in total.
Top

The Tape patch uses a rather ridiculous amount ... 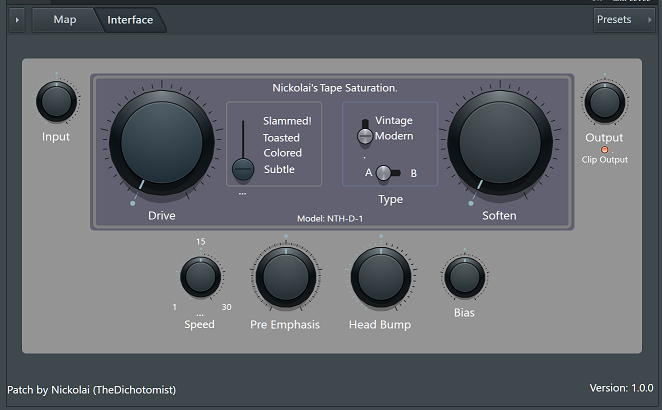 Nice Sound coming from this!!!! your on to some...
Top

awesome!!! will try it out on some masters and ...
Top

I've tried this on some different types of mate...
Top

I played around with most of the knobs (or open...
Top

Just wanted to write back in and say that this ...
Top

Wow, this is an impressive emulation, it really...
Top

Nick! You nailed it! Best tape emulator ever te...
Top

My pleasure buddy it is indeed an interesting ...
Top

Oh, wow! This even sounds great when you dime ...
Top

great saturation and analogue feel too much adv...
Top