Here are the IL glyphs, for those who can't find them.

Here are the IL glyphs, for those who can't find them.

G'day everyone. I hope everyone reading this is having a nice day.

I've grappled with this problem for a while now. We've all seen those really fancy looking patcher presets with the IL glyphs and graphics, and maybe you didn't know how those were made. I only just found out how to do it myself, and thought I would share. And there's a bonus control surface, for those of you who will have the same problem I have, where the font you need to install does not show up in the windows/OSX character map.

So, if you want to do this yourself; at least on windows:
Now, some patches managed to use these glyphs and other special characters as simple labels. I have no idea how they managed to do that, because when I try to paste these characters into a label, they show up as broken symbols or squares. Your mileage may vary.

To use these in a patch, add your glyph button, and edit it's caption. (It's under "properties." ) Clear the text in the caption box, right click the textbox, and open the "character map."

Some of you will see the glyphs in a nice list, and be well on your way to building patches. Some of you though, as I did, will have a list of squares, like this.

That's alright. I've taken the liberty of copying all of those blank squares and pasting them in banks of 20 symbols each (shown below) So if you can't see the symbols in the character map, you don't have to muck about in the dark forever to find one you like. Just load this instance of control surface somewhere in the project, put the surface into edit mode, and copy out the symbol you want. Note, when you go to extract a symbol from the button's caption, they will all show up in the text box as squares; so you will need to count from the left or right, to find the symbol you want. (and this, admittedly, is tricky as the boundaries between symbols aren't always clear)

If you're curious why there is a slider with no name; I added this here to preserve a dedicated blank space symbol. You see, you can't actually have nameless controls in control surface. It forces you to add some kind of mark, like a " . "; even if you try to use the spacebar or tab key. I find it unsightly and annoying. The character in that slider's name will allow you to fill a control's name with a blank space, so you can label it with a dedicated label. (which means you can change font color and height, at least slightly. )

I should point out, there appear to be duplicates of several icons, some icons seem to show up as blank spaces, and other icons which are available in FL studio, are not present here; like randomness, high pass filtering, peaking and shelving filtering -- lots of useful icons aren't here, sadly. But at least you now have a button that will display the ones we do have properly, and you know how to install them; and you even have a palette of icons you can use, should your computer refuse to show them in the character map. 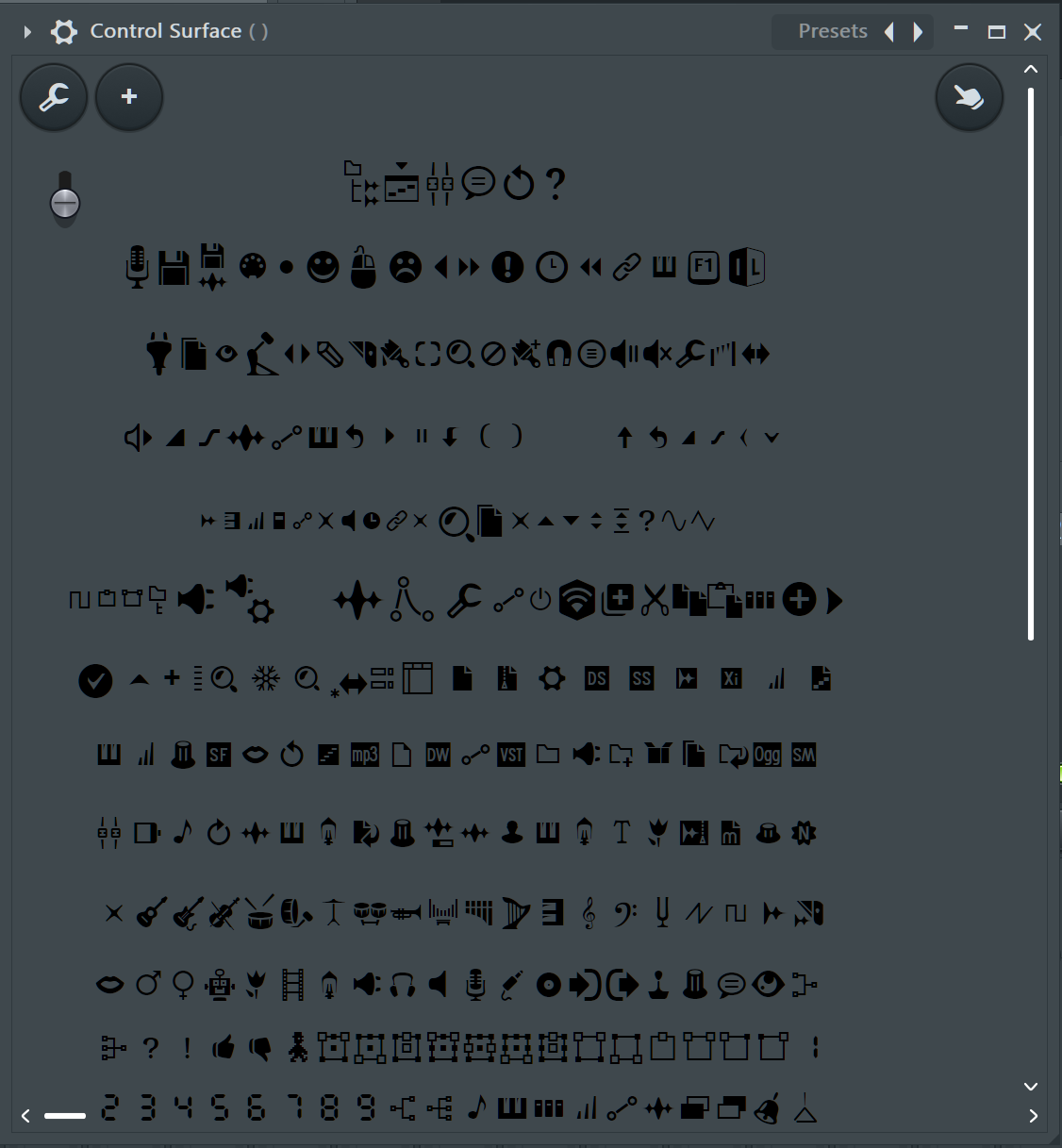 Re: Here are the IL glyphs, for those who can't find them.