I was looking for a one-button setup to A/B compare effect plugins in FL Studio. This most likely has been done before in some way but I could not find any template, so I tried to create a simple one myself in form of a Patcher effect. There might be an easier way of doing this (please let me know if so - thanks), but at least this one works for me.

The preset compares the effect plugins placed into Paths A and B. Switch active paths through pressing a single button.

Load an instrument into the channel rack and assign a Mixer track. Load the Patcher preset (One-button A-B comparison.fst) into the effects section of this Mixer track. Open the Patcher preset and place the same (or a different) preset of the 'effect to be tested' (here Effector Fx Module) in Paths A and B. Open the Control Surface labeled 'A/B Button' and click the button to switch the audio signal between Path A (blue) and Path B (yellow) while playing MIDI notes. You can also right click the 'A/B Button' and link it to a key/pad/knob on a hardware MIDI controller (use 'Latch' mode). Modify settings of the 'effect to be tested' either in Path A or Path B or both, and keep comparing the two using the 'A/B button'. 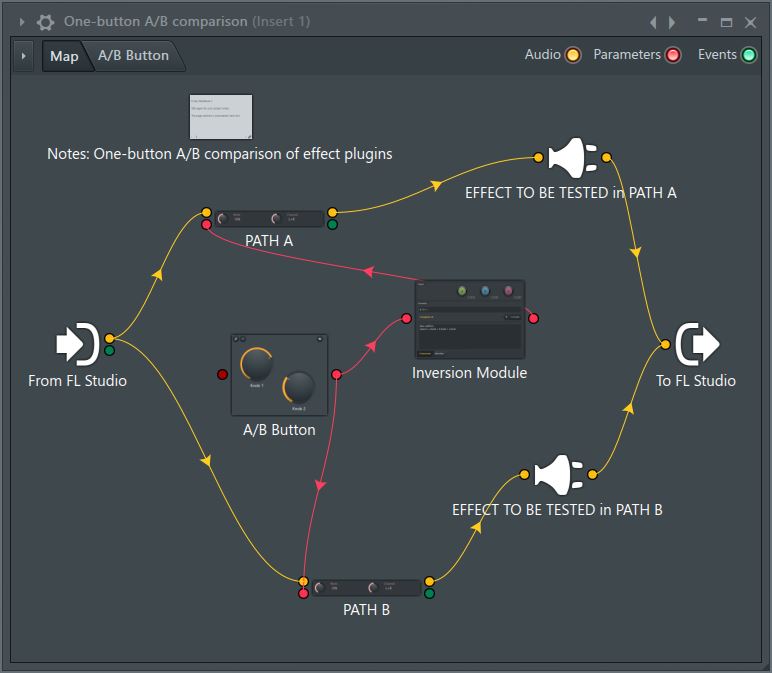 A (late) afterthought: One thing I found annoyi...
Top

As a variation of the 'One-button A/B compariso...
Top
New Topic Post Reply
3 posts • Page 1 of 1